The Snom 760 has a Gigabit passthrough port 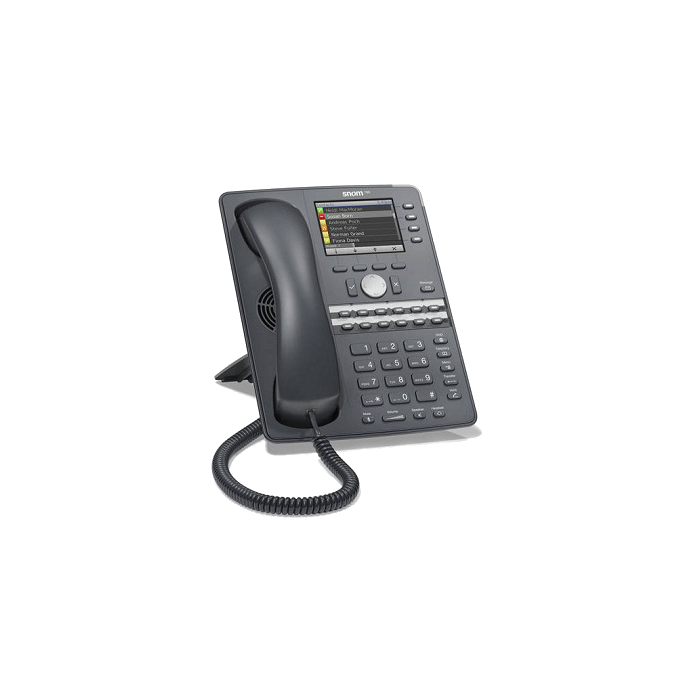 The SNOM 760 has a great GUI which is extremely easy to use and it is displayed on a high-resolution 3.5” colour display with 18-bit colour depth which produces very deep and vivid colours. The menu structure feels natural to use and is extremely easy to navigate around. On the SNOM 760 there are 16 programmable keys which can be programmed to do what you wish in addition; there are 4 variable function keys. The SNOM 760 has LED lights which will indicate whether someone is calling also; the SNOM 760 has caller ID so you will know who is calling you. On the SNOM 760 the LED lights will also indicate whether you have missed or received calls also; the LED lights will indicate whether you have any messages. The SNOM 760 will also list all your missed, dialled and received calls but; it will only hold a maximum of 100 in the list. On the SNOM 760 there is an address book which can hold up to 2000 entries and with those entries you can set up speed dials. Furthermore; on the SNOM 760 you can set the phone to block any anonymous callers automatically and you can set a deny list which will block certain numbers. The phone can handle up to 12 calls at one time so you can talk to a number of people easily

The SNOM 760 has USB ports which can be used to connect a WLAN binding USB stick so you can connect wirelessly. There are a number of features on the phone to make your life easier for example: there is a hold button so you can effortlessly put people on hold, you can forward calls using call forwarding and there is an automatic redial function on the SNOM 760 which will make it a lot easier to follow up missed calls. The SNOM 760 can support a number of audio devices for example wired headsets and Bluetooth® enabled headsets. Also; the SNOM 760 supports conference calls and it can manage up to a 5-way conference calls. In addition the SNOM 760 has the capabilities to perform attended and blind transfers. Furthermore: the SNOM 760 has Call Park and pickup via PBX, the SNOM 760 has call completion and the CMC (Client Matter Code)

The phone has some great security features for example SRTP, SIPS, RTCP, RTCP-XR, TLS and LLDP-MED